Being embarrassed to tell people the name of your band is not one of the secrets to success in the music biz. Thus, I still have a day job. Anyway, here’s a list of some of the bands I’ve been in. Draw your own conclusions. 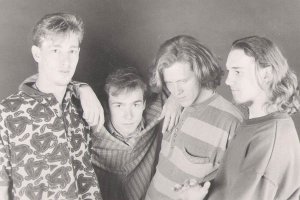 Here’s something from deep within the M. David Hornbuckle archives:

Started in 1991, Quentin’s Bridge was my first serious band after high school. Far too serious for our own good, actually. I’d later go too far in the other direction, and I think I still have trouble balancing the intellectual and the goofy. The band was named after an incident in The Sound and the Fury, where one of the main characters drowns himself in the Charles River during his first year at Harvard. We’d first called ourselves The Dismembers, but we soon realized we weren’t metal enough for a name like that.

We recorded a couple of demos tapes but never made an album. We were pretty sure we were about to become rock stars.

State of the Universe

Waiting in the Walls

Empty as a House

I Wanna Be Arrested

The Smell of Romance

I feel like I haven’t stopped moving since I got back to Birmingham. The mantra leading up to the show seems to have been “is this really happening?” The mantra after has clearly been “did this really happen?” Even as I write this, I find myself multitasking. I have to take a breath here so I can wrap my head around the whole thing.

I guess it happened. I’ve seen video evidence. But even watching it, it’s feels so distant and I barely even recognize myself.

So, for the uninitiated, let me back up a little bit. PopCanon was a band I was in just after college in the mid to late 1990s, when I was living in Gainesville, FL. The band recorded four CDs, toured the East Coast, and played hundreds of shows. It was the most ambitious and the most successful of any project I’ve been a part of (so far). We played our last show in April 2001. We played a reunion show a year after that. We haven’t played together since, until last weekend, the result of a Facebook comment thread that basically got out of hand.

Squeaky was/is the band we were most closely associated with. The two bands played dozens, perhaps more than a hundred, shows together. Squeaky was a straight up rocking and aggressive as PopCanon was goofy and bouncy, but we shared a love of dissonant guitar chords and nerdy references. The two bands were always so closely intertwined, you couldn’t separate us. Seeing Squeaky reformed (even with a new extra band member) would have been reason enough for me to drive to Florida for a weekend. They are my favorite band, still.

So… the weekend. Thursday night, basically all day Friday, and Saturday morning, we rehearsed. Everything more or less meshed right away, not just the music, but being around each other again. The energy of those six personalities bouncing off each other refused to dissipate. Right away, we started doing what we always do–making things more complicated, coming up with more ambitious arrangements and plans, and adding songs to the set list (which we continued to do right up to the moment we took the stage Saturday night).

Every PopCanon song is like a six-way tennis match where we are all trying to outwit each other and challenging the other ones to keep up, and somehow that works. It’s a game we play with each other, and it doesn’t matter if anybody is watching or listening. On Saturday, a hundred or so people came out to see this happen. It was a modest crowd by some measures, but honestly, it was probably about the same as we would have drawn ten years ago at one of our better shows. We would have done the same show whether anybody was there or not.

Being there again… It was truly like we’d never left it. To see Squeaky again, to play with PopCanon again, to talk to our friends and fans after ten years away. Pure joy. The purest.

We’ve all said it. If it was feasible, we would do it again next week. If we didn’t live in six cities, spread across 2,000 miles, if we didn’t have families and non-music careers to which we must attend, we’d buy another bordello red van and drive it around the country again. The musicians I worked with in PopCanon are the best I’ve ever worked with. It is my privilege just to be associated with them.

Tym and I just mixed these down last night. They aren’t 100% final, but they’re close. More to come next week.

Empty as a House

September is full of gigs. Here’s the lowdown:

That possible PopCanon reunion I mentioned here a while ago is actually happening. After almost a full month of maddening 6-way emails about schedules and other details, we finally settled on a date of October 15.

It will be in Gainesville, Florida (naturally) at a new club called Double Down Live (not to be confused with the ZZ Top album of the same name). As always, our good pals Squeaky will open. The famous PopCanon Fight Song has new lyrics for the occasion.

We are scared to death.

It’s been more than ten years since we’ve played together as a group. Some of the band members have not been playing much music at all in the past ten years. Ned said on the phone to me, “This is going to suck, isn’t it?”

I said, “Maybe. It wouldn’t be the first time we’ve sucked.”

Ned replied, “Yeah, but we haven’t sucked on stage in ten years.”

I said, “Maybe you haven’t, but I still do it all the time.”

Man, we love to rock.

This Sunday, July 10, I’ll be playing a solo show at Stillwater Pub in Birmingham. Tym and Brent will join me for at least one set of acoustic Ghost Herd numbers. There may be other special guests. I’ll start playing around 9:30 or 10a nd play until they shut us down. Come on out!

We’ve just set up a fan page on Facebook. Join us there.

Listen to Southbound on Birmingham Mountain Radio tonight between 9 and 10 pm Central to hear our song “Familiar Strangers.”

Our next show is Friday, June 24 at Sipsey Tavern in Birmingham. It will be a rocking good time as always. Be there.

That is all for now.

With our old haunt Common Grounds in Gainesville, FL closing down, there’s been some mutterings about a possible PopCanon reunion sometime in the near future. The former band members have discussed it, and we can’t get it together before Common Grounds closes its doors, but we are all very interested in doing a show–maybe a couple of shows–later on this year, perhaps in the fall.

I talked to Tony from No Idea records about us doing this reunion at the Fest this October, but it was a no-go. So we are left to our own devices. Will people actually show up to see this? We don’t know. Every time I go to Gainesville, at least a couple of people tell me how much they liked that band, which is amazing. The height of our popularity seems to have been after we broke up. Most of the time, we were struggling to bring 25 or 50 people in the door. But then again, our Last Show Ever was an event not to be missed, and the reunion show we played a year later got a pretty good response.

I told Ned we should do a week-long tour. It would be hilarious and stupid, almost hilarious and stupid enough to actually do it. Someone said they could get us shows in Atlanta and Miami. I could probably get us a show in Birmingham, Raleigh, or New York. But then Ned reminded me how depressing it would be to drive to all those places in a van and play for nobody. One show in Gainesville is probably all our fame can muster. Can we even muster that?

So who knows? Maybe this will happen. Maybe people will witness it. Maybe Randy from Blue Sky Baby will meet us at the county line with a plate of ribs.

As for Common Grounds, I’ll be going down there next weekend to pay my respects. I’ll write more about the club at that time.