In 1995, I played my first show with the band that would become PopCanon, at a little coffeehouse called Insomnia in Gainesville, Florida. I had just opened for Planet Ten up the street at the Civic Media Center, and they invited me to open this show. Planet Ten bassist Ned Davis and drummer Blue Lang said they’d “back me.” So we rocked through ten or eleven songs with me calling out the chord changes, and you’d never have guessed that we’d never played together before.

Shortly after that, Insomnia came under new management and changed its name to Common Grounds. It was a dark, smoky place where arty teenagers and grizzled drunks played chess and talked about existentialism. It was the kind of place every town out to have, especially a college town. The owners of Common Grounds (various owners over time) were some of PopCanon’s biggest supporters. As the band grew from three to four to six or seven members (sometimes more), we played there once a month for the next five years. Common Grounds bought the space next door and doubled in size, put in a professional sound system, and grew right along with us.

I played shows there with a bunch of other bands as well–Eurotoaster, the Exes, the Familiar, and Project Dingo. I did solo shows there. I played background music for art events. One New Years Eve, I played in three different bands. I juggled beer cans for open mike nights and sang Led Zeppelin songs when there were karaoke nights. And when I wasn’t performing there, I was almost always there anyway, perched at the bar with a Guinness. I met some amazing friends there over the years, many of whom I am still close to.

Almost any night of the week, and certainly any weekend night, a band would be playing and that band would be good. We may have never heard of them, but people would pay attention, often would dance. It was an incredibly supportive, open environment for musicians. Especially after other venues like the Covered Dish and the Hardback Cafe went out of business, Common Grounds was one of the only places keeping the music scene in Gainesville alive for years.

Some time after I moved to New York, Common Grounds moved to the old Covered Dish location, further securing its place in Gainesville music history. With a larger space (and a liquor license), they could host bigger and better shows. At the end of this month, they will leave that location, and then Common Grounds will be no more. Owner Nigel Hamm said, “Fifteen years is a pretty good run. It was time to move on.”

What Nigel will move onto, and more importantly, what will fill the void in Gainesville’s music scene, remains to be seen.

In the meantime, Ashley Dean Myles decided that a Common Grounds reunion was in order. She put out the word on Facebook, and the response was overwhelmingly positive. I drove down from Birmingham for the weekend. Others came from New York, Chicago, and elsewhere to attend. 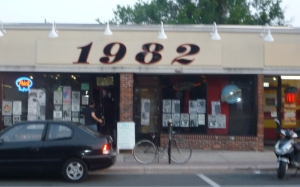 Though the decor had changed somewhat, 1982 still had the basic dinginess that was integral to the atmosphere at Common Grounds in the early days.

It was sort of overwhelming to walk in there.  Right away, I saw a dozen people I hadn’t seen in ten years–among them Liz, Spider, Joe, Fitz, and James Lantz. I have visited Gainesville a good bit since I moved away, so I had seen many of the locals–Matt, Frog, Tom Miller, Rusty Valentine, and others–periodically over the years. Still, it was strange to see everyone in that space, already doing Guinness challenges at 7pm.

At nine, Ashley herded everybody over to the current Common Grounds location. Mike Cecchini of the Remedies, one of several staple bands from what I consider to be CG’s heyday, had flown in from New York and played a set with his old band mates for the first time in several years. And they rocked ass, as expected.

After that, some bands that had already been booked for the night before the reunion was planned went on. Unfortunately for those bands, many of us chose to stay out on the patio and catch up rather than listen, ironic given that so much of the draw of Common Grounds in the first place was the music. At the end of the night, James Lantz played an acoustic set. Everyone did go back inside to watch that, and it was a fitting finale for the event.