My trip started out on a melancholy note because one of the cats I’ve lived with for the past eight years is sick, and the vet doesn’t know what’s wrong. Tonight, there are reports that she is improving though, and she has a sonogram scheduled for tomorrow, so I’m thinking positive thoughts for a quick recovery.

In the meantime, I’m in Philadelphia. The first order of business was to meet my friend and sometimes songwriting partner George Mostoller for dinner. On the way down, I listened to a mix tape that George made me in 1994. It is still one of my favorite mixes.

George took me to Brauhaus Schmitz on South Street. The waitstaff all wear traditional Bavarian outfits. I had two very large, delicious sausages. The pictures on their website really don’t do the place justice. I should have taken some pictures, but I haven’t taken my new camera out of the box yet. But in lieu of that, here is a cell phone picture of a cat at a pet store. 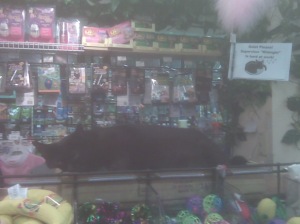 George is kind of a hermit these days, so it’s up to me to keep his songs in circulation. Here is a video of me performing one of those songs.

I’m staying the night with Jason Fagone, author of Horsemen of the Esophogus. We discussed the state of contemporary short stories and Rick Moody’s Twitter story before watching Obama’s speech, followed by So You Think You Can Dance, which I’ve never seen before tonight.

I’m getting up early tomorrow to drive to Charlottesville, VA.