I acquired a table at the NOLA bookfair to promote Steel Toe Review as well as my two books.

On the way down, I stopped at a Chick-fil-A in Meridian, MS because I had to attend a conference call for work. I was there for almost three hours, during which I overheard the manager discuss with several people his theories about the similarities between the U.S. today and Germany in 1939. He also refilled my drink several times, so I let it slide. Languid Christian music was playing on the p.a. I ate two chicken biscuits.

I picked up my much overqualified editorial assistant at the New Orleans airport because she was flying in from Florida. It was nothing short of miraculous that we found each other there, since I was running late, she wasn’t sure if I was coming to get her, and she is the last person on earth who doesn’t own a cell phone. But I guess since I tolerated the Lord for three hours at Chick-fil-A earlier in the day, He was looking after me.

The divine intervention didn’t end there–for example, getting back to our motel each night after the relentless debauchery and decadence that being in New Orleans seems to necessitate. Also, my assistant and I each randomly encountered people we knew but hadn’t seen in more than a decade and whom we did not know now lived in New Orleans. But I’m getting things out of order.

After checking into the charming Super 8 motel and inspecting it for bed bugs, the first stop was the official pre-party for the book fair, where Jordan Flaherty, author of Floodlines, was giving a talk about post-deluvian community organizing. Flaherty was funny and inspiring, despite the fact that I personally have very little emotional brain space at the moment to care about anything at all (cf. this and this, but I’m digressing again already).

We saw our first jazz funeral parade of the weekend as we were leaving the party. We headed down to Frenchmen Street, where the fair would be taking place the next day, drank way too much bourbon, and then called it a night. 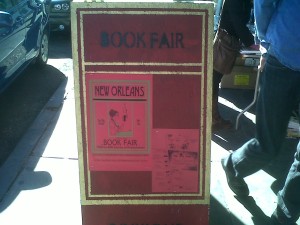 Early the next morning (okay, about 10 am, which is early by N.O. standards), we set up our table. I had a surprising amount of interest in both the books and the literary magazine. I met several writers, whom I asked to submit to STR. I was asked to be on the radio. And my assistant and I ate shared a muffaletta that was bigger than both our heads combined.

We also saw another, much larger funeral parade, which I came to find out was in honor of the famous photographer Herman Leonard.

There was an after-party for the book fair at an undisclosed location. We were supposed to call a number after 7pm for directions. That was far too complicated for us. But we did attend the book fair-related Books & Burlesque show upstairs at Le Maison. The book theme was a stretch for several of the burlesque acts, but it was pretty entertaining. Somehow, I got roped into the audience participation segment of the show, which turned out to be a trivia game (we didn’t win, sadly).

The revelry continued after the burlesque was over, until the wee hours of the morning. Around 10 am (again, early by N.O. standards) we were awakened by what seemed to be a rocking gospel band performing just outside our motel room. Neither of us had the energy to actually get up and look out the window, so we still don’t really know what happened. But speaking of music, I forgot to mention that there was incredible music everywhere we went, more than I ever remember from my previous trips here. On every street corner, at every bar, many styles of music, expertly and joyfully performed.

When we finally managed to get up on Sunday, we met up with friends at Court of Two Sisters for their famous jazz brunch (more excellent music, not to mention amazing foodstuffs). This had to be followed by yet another nap, which was then followed by a home-cooked meal at another friend’s house.

It will require several more blog posts to fill in the details on some of these events. There are definitely stories worth telling. New Orleans never fails me in that respect.