I spent most of the day lingering around all my old haunts in Five Points, seeing what was still around and what was new. Not much has changed actually. Some bars have closed. Some have different names than they used to. But it’s still pretty much the same place. For those of you who aren’t from the Ham, this curious fountain/sculpture is the centerpiece of the area. 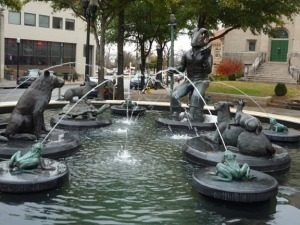 As you can imagine, this installation is a little controversial amongst the locals. When I was in PopCanon (1995-2001) I wrote a song about this area called Ice on the Sidewalk. The song starts off about this time that I literally ran across something on the sidewalk that looked like ice, though it was the middle of summer, and when I touched it I realized it was some kind of gelatin. As was my wont in those days, I was kind of high at the time, and this just sort of freaked me out. That is how songs start I guess.

Anyway, I ate lunch with former Pain trombonist Jason Reid at Surin West, and I had a great time catching up with him. After lunch, I paid visits to Charlemagne Records and Golden Temple. These places are all pretty much the same as they were when I was in college, except Charlemagne has more CDs now than it did in 1994.

Then I headed over the hill into Homewood and dropped by the Alabama Booksmith (which btw has signed copies of my book for sale), to say hello. I worked at this store when I was in college, when it was called the Highland Booksmith and at a different location. Despite the dream I had about the store the night before my visit, it had not been overtaken by lizard-like aliens.

That night, for a lark, I went to the Alabama Theatre to see the Alabama Symphony Orchestra pay tribute to the music of Led Zeppelin. Does anyone remember laughter? I do. After the concert, I caught a partial set of some scary good bluegrass at Marty’s. I couldn’t stay long because I had committed to seeing another former Pain member, Stuart McNair, play a set down at the Barking Kudu.

Now the ASO doing Zep was really just silly, and kind of pointless since they actually had a long-haired singer who sounded like Robert Plant and a long-haired guitarist who sounded like Jimmy Page, so the orchestra didn’t really have that much work to do. But I did see some skilled guitar playing at all three venues. Made me feel like I needed to sit down and practice a little.