On the plane into Richmond, I sat next to a very nice lady who kindly chatted with me throughout the flight about the stories in the Reader’s Digest that she had with her and even quizzed me on the vocabulary in the “WordPower” section. She was a hoot, and she promised to pick up a copy of my book when she got to Charlottesville.

After landing, it was back to the highways to see my old bandmate Angela DiPaolo in Wake Forest, NC. Another old music friend, Crystal Dawn, is also living there. The three of us joined up with Angela’s friend Will to play some music at Gigi’s House Bistro. We played for about three hours, all sitting in on each others’ sets, whether we knew the songs or not. It was really almost too much fun. I crashed at Angela’s. By the time I remembered to take my camera out, everyone was in pajamas and refused to have their picture taken. So here is a picture of Angela’s cat, Lyric. 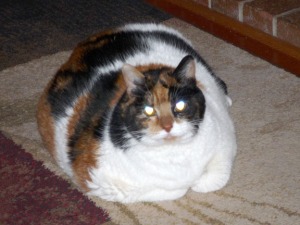 In the morning, Crystal (who also stayed over, as did her dog Lucy) made bacon, eggs, and biscuits. Then I shot some hoops with Angela’s three boys. Again, almost too much fun–especially since the goal was set low enough for me to dunk.

Finally, I had to hit the road again. I had about a 7.5 hour drive to Murfreesboro, TN to visit college friends Holly and Brian. I passed this Adam&Eve outlet store along the way, and if you know what Adam&Eve sells, you know why I think this is hilarious. Yes, those are lingerie mannequins in the window.

I got to Murfreesboro just in time for dinner. Brian made some really awesome Italian wedding soup and sweet tea (of course), which I consumed in copious amounts. Tomorrow is Memphis.